Let’s just call it like it is- Life with type 1 diabetes is rough. The lessons learned along the way with over 47 years of living with diabetes.

The shame and denial I felt as a youth about my diabetic diagnosis had some devastating consequences. My parent’s denial exacerbated my shame and denial. Remember, I was living with diabetes long before Instagram, Facebook, and the Internet. The only outside messaging I received as a young child was from television commercials with sobering warnings of blindness, kidney failure, and death. Not exactly empowering or hopeful messages for a little kid, and I often fled those ads, seeking the safety and comfort of my bed.

Living with diabetes, I instituted some intense false narratives for my life. I felt isolated and was uncomfortably aware of being ‘sick’ and ‘different.’ I did have friends, but I never felt understood or accepted by them; I was a loner.

I worked hard at hiding my chronic condition. I overcompensated for my perceived flaw by striving for perfection. I feared dating, believing that boys would have no interest in me and my disease. Through high school, I focused on dance and though delusional, I had big dreams.

I also had a strong ability to self- sabotage, daring my diabetes with risky behavior. I developed an eating disorder, bingeing, purging, and taking speed. My goal was to weigh 88 pounds and to see what would happen when I ate all the things I knew I shouldn’t.

At 20 years old, I got a harsh wakeup call which forced me to accept and work toward managing my diabetes. Dr. Marc Yoshizumi nicknamed ‘Yosh’ was the straight-shooting eye doctor that diagnosed me with severe diabetic retinopathy. The cold, hard reality was that I brought this condition on myself through ice cream sandwiches, Big Macs, and cereal box binges.

The retinopathy diagnosis, or bleeding in the back of my eyes, was already quite advanced.  Yosh sternly advised me to get my act together or the consequences would be at best blindness, and worst death. As a visually impaired person, I could no longer drive and was forced to give up my car keys. Denial and shame cost me my eyesight, but this became a turning point. Looking back, I now know this forced my first transformational experience of Trauma into Triumph.

The time had come to make peace with my diabetes, I knew I had to make significant life changes. I was legally blind and could no longer drive. This was a HUGE wake-up call.

In 2020, I left Los Angeles and moved back to New York City. I sought a transportation solution and in New York with public transportation, I could get anywhere at any time.

What I found in New York were years of harsh life lessons, menial work, and a lack of money.  I struggled to eat and sought shelter through friends. It’s true, if you can make it in New York, you can make it anywhere. New York City can be your best friend or your worst nightmare, like a beast to be tamed.

In retrospect, this time was the biggest and most necessary lesson of my life. My Dad fell apart financially and could no longer support me. I scraped by through the help of friends and my doctor who gave me sample bottles of insulin because I couldn’t afford my medical co-pays. I lived irresponsibly and arrogantly, and I needed to dig deep to reframe my deeply ingrained belief system.

I moved every 9 months for five years, crashing on couches and house sitting. In time, I found a secure living situation, and although terrified, in my mid-thirties, I started dating a little. I had yet to have an actual relationship, and though not surprising, the men were emotionally unavailable, which was a direct reflection of my own inability to be intimate.

I had gotten to a place where I was open about living with diabetes. The attitude adjustment was slow, but I made steady and incremental progress. Instead of hiding my illness, I openly lived with my diabetes. I immersed myself in educating and supporting kids with diabetes, the support I never had, and so desperately wanted.

I transformed my trauma into triumph, creating the SWEET ENUFF Movement.  SWEET ENUFF grew from just focusing on diabetes to including an obesity prevention program for kids. I successfully integrated my dance training into creating fun programs for kids, supporting them in living confidently open with their own diabetes. It was working.

I was taking responsibility for my life.  I got a real job, two actually. I was becoming financially independent, saving money, and paid my rent and student loans on time. I successfully faced my worst fear which was failing at being independent. I was exhausted and I often didn’t feel well, but I kept moving forward.

I found myself growing more confident in my own abilities. What I sought most was a sense of independence. I wanted to prove to myself I could work like everyone else and I could be a productive member of society diabetes or not. I was still battling feeling like no one would want me romantically but at least I was finding a sense of purpose and mission.

I found ways to take better care of my diabetes and for the first time, I felt seen for just being me. I enjoyed working, making my own money, and relished my newfound freedom. I was finding a balance between diabetes management and living life.

On May 1, 2009 I was hit and run over by a New York City bus. The story is widely told and detailed in my book ‘Dance Because You Can’ 5 Steps to Transform Trauma into Triumph. My injuries were severe with my right leg crushed and nearly amputated. The first on scene surgical team considered amputation because they didn’t feel I could recover from such a severe injury with type 1 diabetes.

By this point, I was 39 years old, healthy with controlled diabetes. I was healthy and strong. With a second opinion, I was transferred to a trauma hospital. Over what would become twenty surgeries, bacterial infection, and cardiac trauma, my leg was rebuilt. I learned to walk and even performed on stage again, dancing in 2017 with my professional dance company The Victory Dance Project.

Truth be told it remains an enormous amount of work and never out of my mind. Diabetes is a condition you can’t see, and it is sometimes hard to articulate to others how I am feeling. I’ve become adept at managing the high and low blood sugars and I carry glucose tablets with me everywhere.

I have collected tools to help manage my diabetes. The advancement in technologies are incredible since my diagnosis in 1973, I now wear a Dexcom continuous glucose monitor and I’ve figured out what foods work and don’t work. I remain diligent about eating well, managing medications, sleep, exercise, and stress. I am ‘out of the closet’ in terms of my diabetes and I feel I am making a difference in educating others about living with a chronic condition. 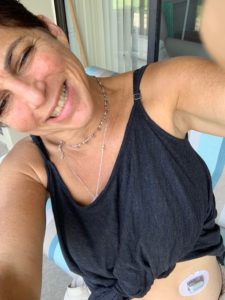 I’ve learned to manage the misconceptions of others regarding my condition. Perhaps the most challenging part of managing type 1 diabetes is the misconception that it’s alright to ‘cheat’ or eat ‘bad’ without consequence. Diabetes management is a 24/7 job where vacation is not an option.

I am still single and hate dating, though I’ve become more confident in communicating my diabetes-related needs without shame. I try to view my diabetes as a benefit. I eat very well, exercise frequently, and try to minimize stress. I am patient and compassionate with myself, living an ultra-healthy lifestyle. Through my diabetes, I have learned discipline, diligence, and direction. By planning, I can prevent difficult or dangerous consequences.

I see opportunity in every situation which helped to develop my mission and is the inspiration behind my Internationally acclaimed documentary feature film ‘Amy’s Victory Dance’. The documentary is a different portrayal of diabetes from my childhood experience. My desire is for young people, or anyone for that matter, to know that diabetes can be managed to encompass a full and happy life.

As a result of my lifelong diabetes, I continue to work to Transform Trauma into Triumph. I continue SGI Buddhism practice and chant Nam Myoho Renge Kyo. The SGI practice teaches transformation from the inside out. Transforming trauma to triumph is what I do.

We use cookies on our website to give you the most relevant experience by remembering your preferences and repeat visits. By clicking “Accept”, you consent to the use of ALL the cookies.
Cookie settingsACCEPT
Manage consent

This website uses cookies to improve your experience while you navigate through the website. Out of these, the cookies that are categorized as necessary are stored on your browser as they are essential for the working of basic functionalities of the website. We also use third-party cookies that help us analyze and understand how you use this website. These cookies will be stored in your browser only with your consent. You also have the option to opt-out of these cookies. But opting out of some of these cookies may affect your browsing experience.
Necessary Always Enabled
Necessary cookies are absolutely essential for the website to function properly. This category only includes cookies that ensures basic functionalities and security features of the website. These cookies do not store any personal information.
Non-necessary
Any cookies that may not be particularly necessary for the website to function and is used specifically to collect user personal data via analytics, ads, other embedded contents are termed as non-necessary cookies. It is mandatory to procure user consent prior to running these cookies on your website.
SAVE & ACCEPT
Scroll to Top